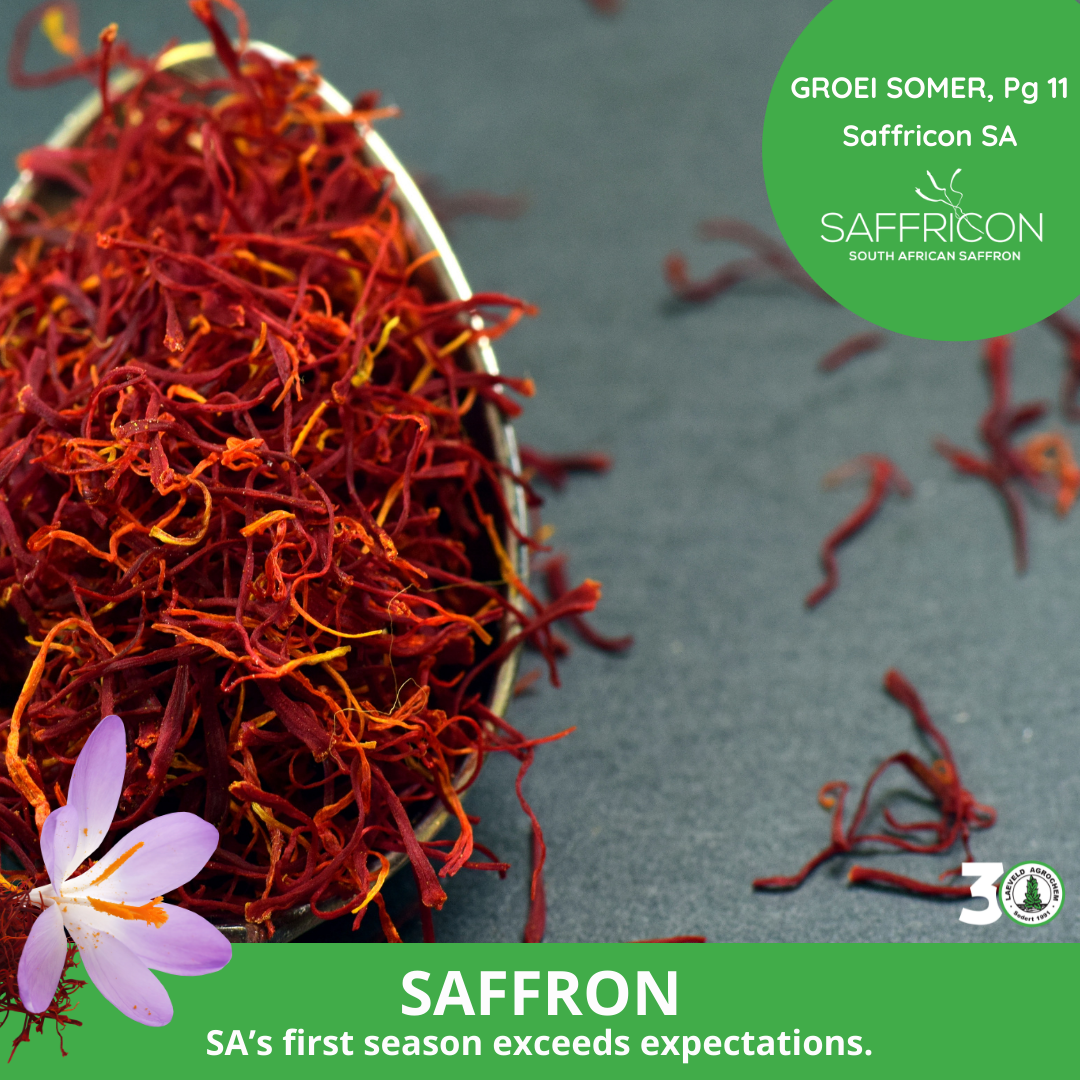 SA’s first saffron season exceeds expectations
South Africa started its first full-fledged planting of saffron last year, and the first season exceeded all expectations, with most farmers producing successful crops.
According to Bennie Engelbrecht, founding member and director of Saffricon SA, saffron has been planted in all nine provinces and the feedback from farmers indicates a success rate of about 95%.
Read the article Published in GROEI magazine
As Saffron is a high value crop and new in South Africa, technical support from an experienced team of experts is essential. Read more about how Laeveld Agrochem and our AgTech partner, Agri Technovation supports Saffron farmers in South Africa. 👉Read more 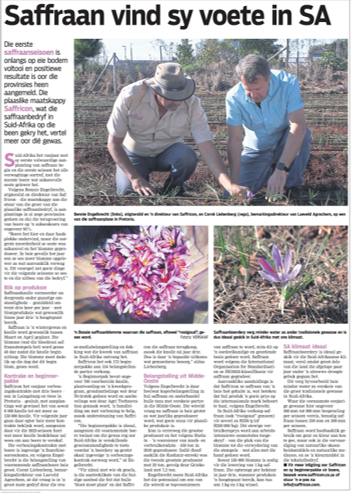 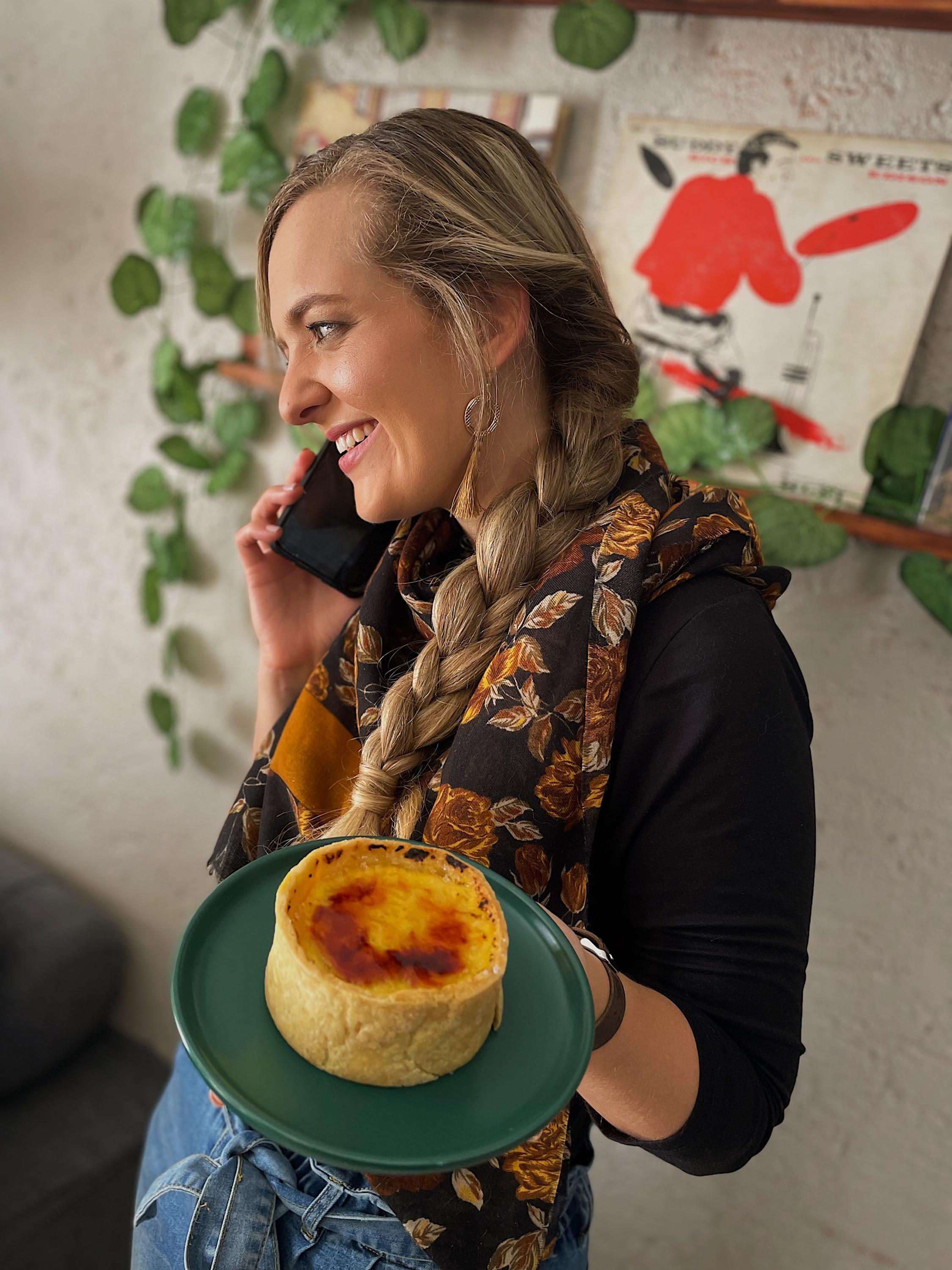 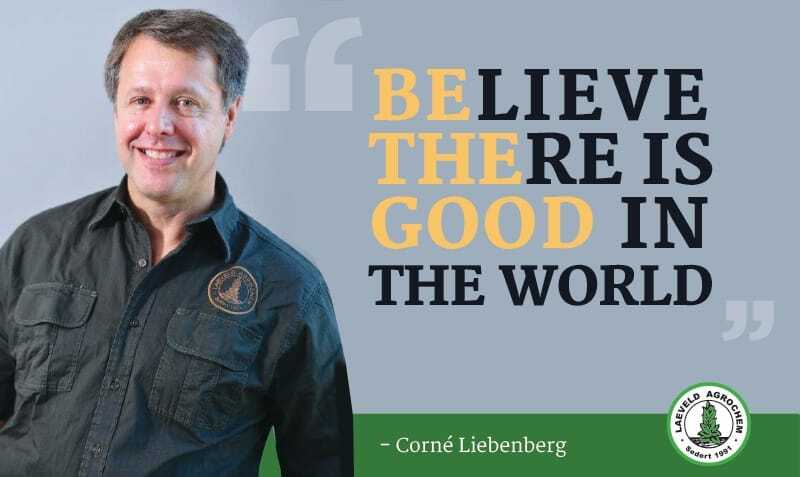 "I believe that we genuinely have sufficient resources in Africa.
No one, at no time should go hungry." Corné Liebenberg. 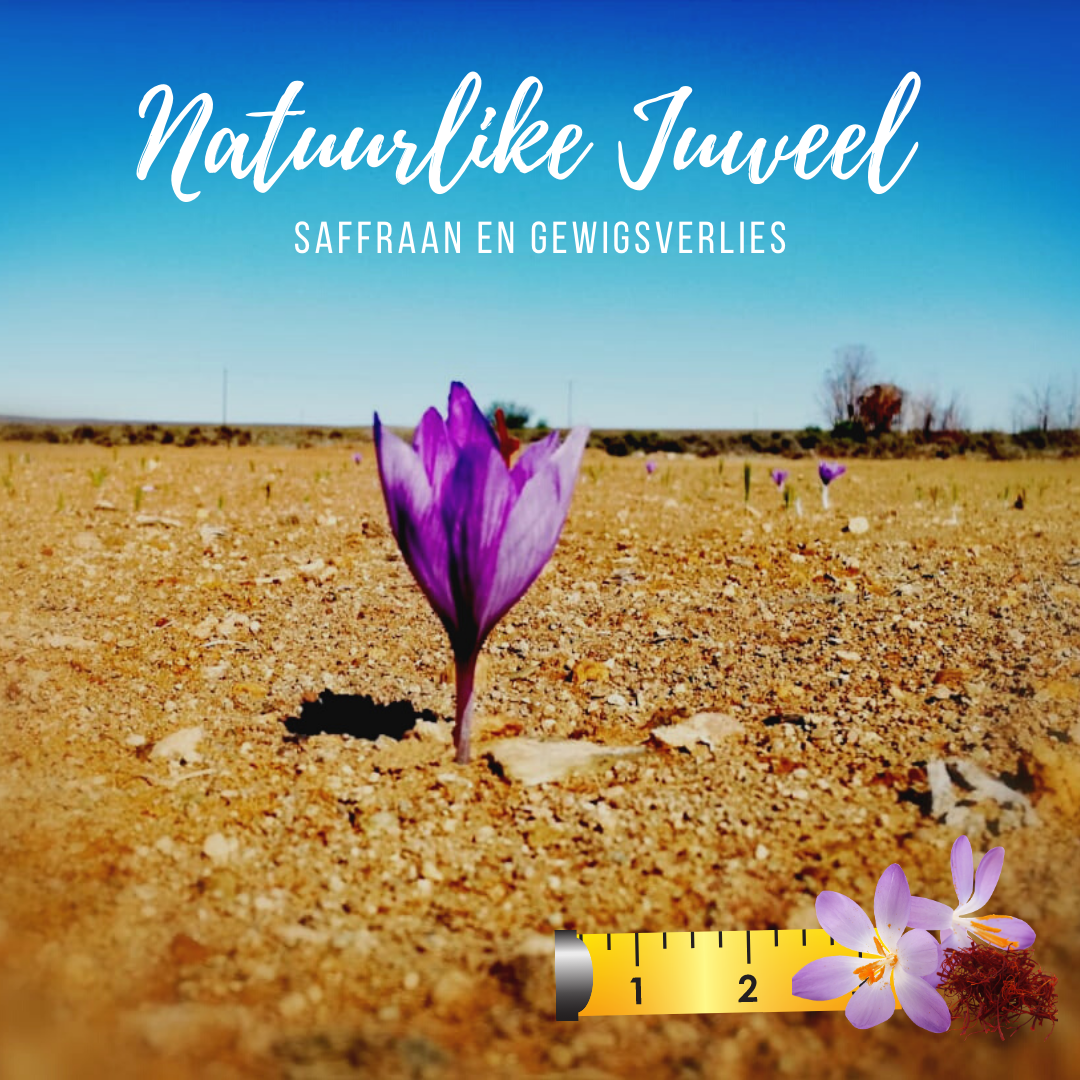 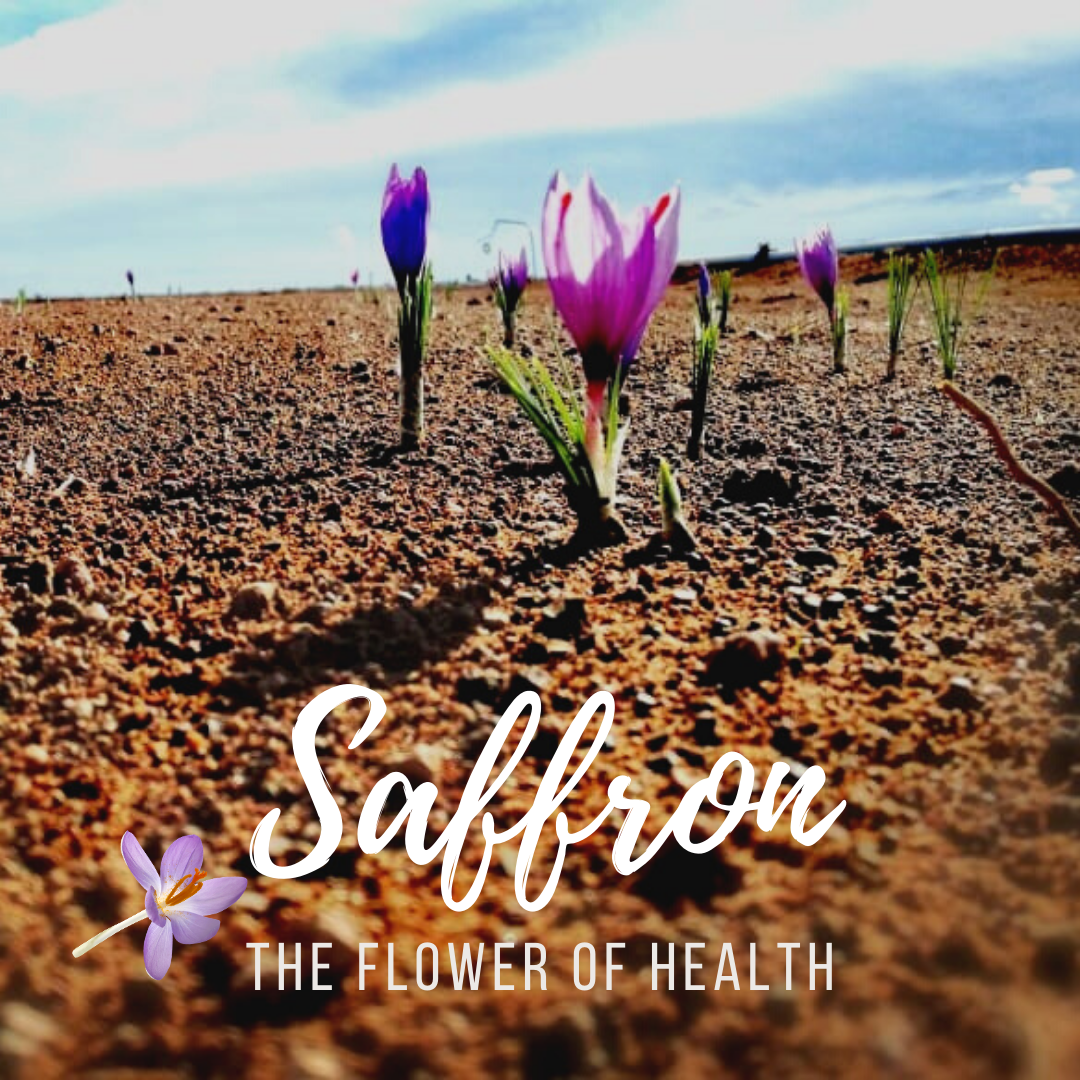 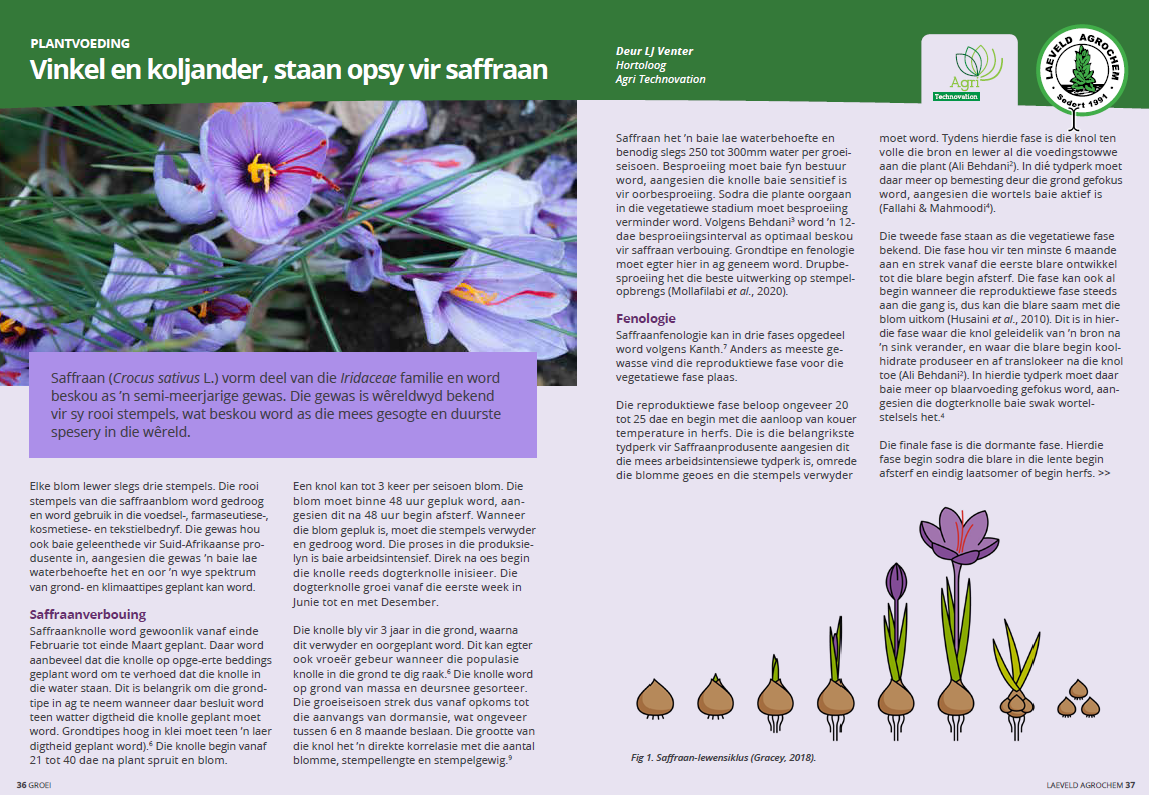 SA poised to become big player in saffron market.
Plans are in place that could see South Africa becoming a significant player in the farming and export of saffron – by far the world’s most expensive spice. For the South African economy, this offers an invaluable source of foreign income from exports, whilst also assisting in establishing emerging, small-scale farmers. Furthermore, it offers commercial farmers an alternative source of income through diversification, especially considering ever-changing weather patterns, market trends, and other variables that impact on their existing operations.


Bennie Engelbrecht, founder and a director of Saffricon, says that their saffron farming operation between Calvinia and Williston in the Northern Cape has been perfecting the art of cultivating saffron in local conditions for the last few years, and that they have reached the next stage of opening up the opportunity to other prospective farmers.
This will be accomplished through an outgrower (contract grower) system based on three-year contracts with farmers. “We supply the farmers with our saffron corms (bulbs), which they then plant and cultivate before harvesting the saffron threads (made up of the crimson-coloured stigmas and styles) and selling the annual crop back to us. The corms multiply underground, on average, about three times per year – that means if one corm is planted in year one, you will, on average, have three corms in year two, nine in year three, 27 in year four, and so on.
“The corms are sold back to Saffricon after year three, hence farmers’ take-up is guaranteed, and they have a double-income potential: from the annual saffron harvest, as well as from the multiplied corms.”
Saffricon has started marketing the outgrower system to prospective saffron farmers and expect to have built sufficient corm stock by next year to start gaining momentum. “This year, there is limited corm stock available and only a few hand-picked outgrowers will be supplied with the product. But by 2022, we should be able to help many more. So, interested parties should start placing orders with Saffricon (www.saffricon.co.za) as soon as possible in order to not be disappointed.”

Corné Liebenberg, the marketing director of Laeveld Agrochem (LAC), says, as a partner of Saffricon, they foresee a huge potential for saffron farming in South Africa. He believes it offers an ideal opportunity – not only for existing commercial farmers, but also for the development of small-scale emerging farmers – and, as such, will assist in addressing the country’s high unemployment.


“LAC wants to assist and uplift as far as possible, and the saffron venture offers many farmers that are currently under pressure an alternative option, whilst at the same time giving small-scale farmers an opportunity with solid prospects.
“It is ideal for niche farming – a huge growth area for the South African economy and something that LAC is very passionate about. The initial capital outlay is manageable, relatively little space is required (250m² can accommodate 15 000 corms), and Saffricon will assist with training to bring new farmers up to speed,” says Liebenberg.
“The outgrower (contract grower) system will uplift especially rural communities and give them a means to not only provide for their basic necessities, but also assist them to establish their own businesses with good growth possibilities. Concomitantly, the farmer does not have to wait very long for his return as is the case with many other crops. The above-ground plant growth and eventual harvesting of the flowers happen relatively quickly after the corm is planted.
The farming of saffron is also ideally suited to the South African climate – which, in the last few years, has gone through a harsh drought – as it requires much less water compared to many of the large traditional crops in South Africa,” adds Liebenberg.
Where South Africa’s most prevalent annual crops require roughly between 500-800mm of irrigation per season, saffron – a winter crop grown from March to October – needs between 250mm and 300mm per season.
Liebenberg continues: “Saffron can be grown in almost any environment, in conditions that are traditionally not ideally suited for most kinds of agriculture – such as the Northern Cape, which actually suits the cultivation of saffron. Hence it allows for the production of profitable vegetation from unprofitable soil.
Furthermore, not only is the saffron plant frost-resistant, but it is also protected from adverse weather elements like hail for a large part of the year because of its corms being underground. The latter, and the fact that the corms are not edible, will hopefully also keep it out of the hands of petty criminals looking for food.”
In South Africa, saffron (sometimes referred to as “red gold”) retails for as much as R250/g (or R250 000/kg). The hefty price tag is attributed to the labour-intensive harvesting methods followed – from picking the flowers to removing the threads – which is all done by hand. According to Engelbrecht, 150 000 flowers are needed for 1kg of saffron. “And there are three threads per flower, which means 450 000 (dried) threads are needed for 1kg of saffron. The return per hectare, in year three when production peaks, can vary between 1kg to 5kg.”

Local saffron farmers can expect to receive up to R200 000/kg from Saffricon for their produce, depending on the quality of their saffron. Engelbrecht says that, compared to most of the imported product that hardly has a smell to it and is tasteless, their saffron has a distinctive flavour and aroma, which is proof of the quality that they are achieving.


Engelbrecht foresees solid growth prospects for the international saffron market, primarily because world demand far exceeds supply.
According to a report by Grand View Research, the global saffron market size was valued at US$881.7 million (about R13.4 billion) in 2019, with expected compound annual growth of 7.3%, reaching US$1.6 billion (about R22.4 billion) in 2027. Grand View Research base their findings on a growing food industry, improved standard of living, and increasing consumer disposable income.
Saffron is primarily used in the food industry as a seasoning to enhance flavour and aroma, but also has great use in the natural cosmetics and natural medicine industries, and as a dye in the textile industry.
“The ‘wonder plant’ has no wastage. The corms are the assets, whilst the saffron threads are most popular as a spice and the flowers have medicinal attributes and are used for perfumes and other cosmetics,” says Liebenberg.
Iran is the largest producer of saffron, accounting for about 90% of the world market, of which most is exported. Other countries where the product is grown include Kashmir, Afghanistan, Greece, Spain, Morocco, India, and now also South Africa.
The country’s new endeavour into saffron farming will feature in LAC’s sixth season of the award-winning Nisboere TV programme which will start airing this month on VIA, DStv channel 147. 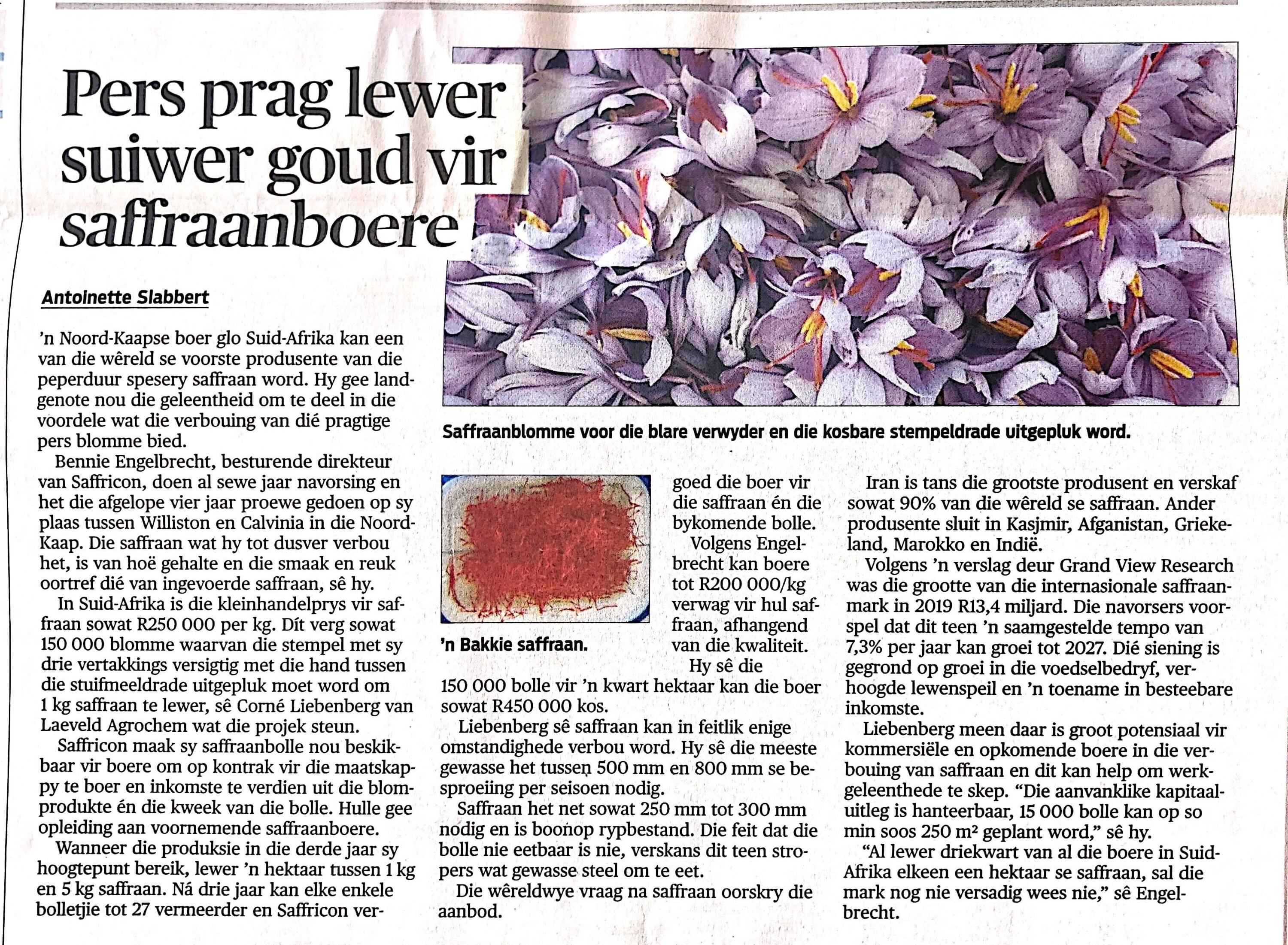 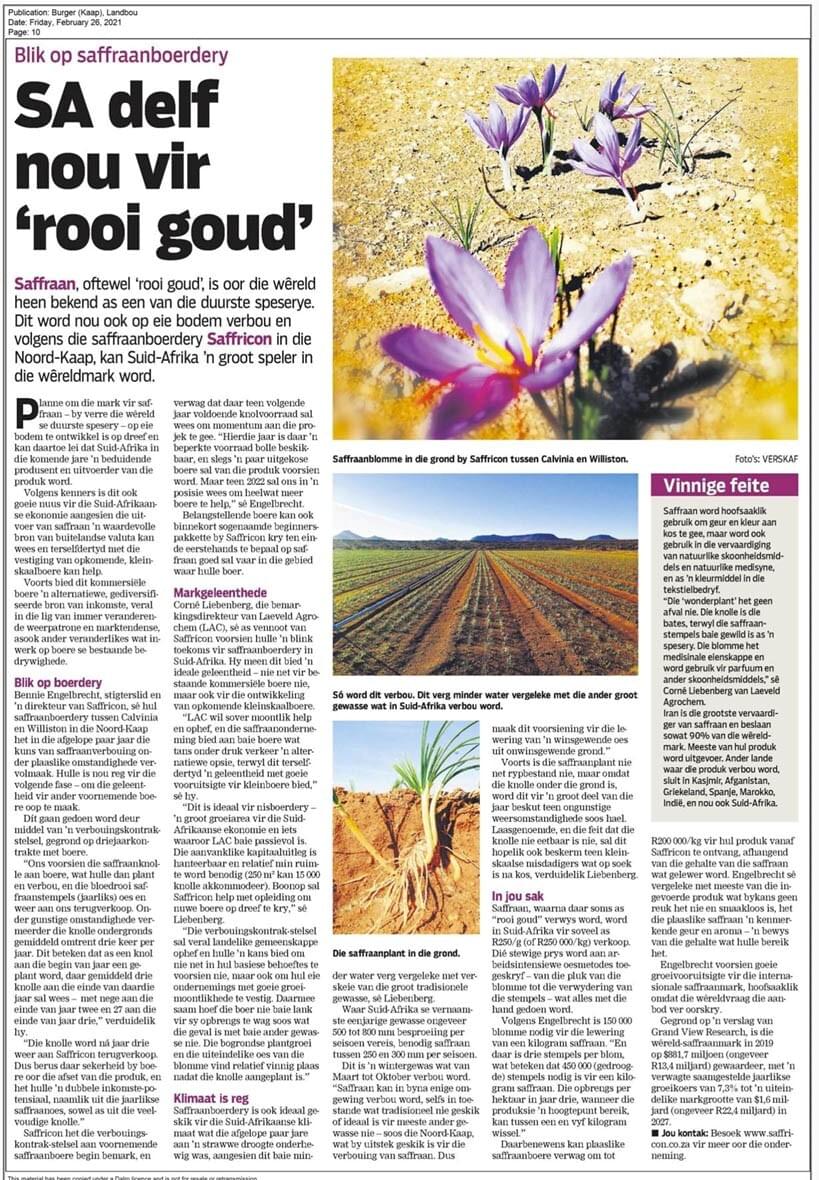